How do you measure the worth of a life?

Last year a Dutch man sat at a table with a Danish filmmaker to have a talk about perspectives.  The man is Sjoerd, a portly guy who appears to be in his 40s with an amiable, thoughtful face.  You like him immediately.  He begins the conversation with a question – “I have Down syndrome, what do people in Denmark think about me?”

This should be interesting.  In Denmark, 98% of pregnancies testing positive for Down syndrome end in abortion.  And almost every pregnancy is tested.

Have you ever had to wonder what an entire country full of people might think about you?

Apparently Sjoerd has and he is about to get an answer.  His Danish interviewee, a fine specimen of a healthy Northern European, responds that in Denmark people with Down syndrome are like windmills.  It’s a wonderful idea – we like them, he says.  But one in our back yard?  No, too ugly.  And the noise!  It’s not for us.

You see, he says, in Denmark we don’t want Down syndrome in the back yard.   “It conflicts with the idea of perfection, the perfect family, the perfect child.”  A third man, observing the conversation, remarks to Sjoerd – “apparently you don’t meet that picture of perfection.”

Wow.  How do you react to that?  There is a whole country where people like you aren’t wanted.  They are aiming for perfection and, you understand, you’re not it.

You feel for Sjoerd.  Especially when you have a daughter just like him.

These questions concern me.  I am deeply concerned.  But not for my daughter.  For the rest of us.

It’s almost heartbreaking to watch Sjoerd process what he has heard.  “I’m not perfect.  That’s not what I am saying.”  Your heart is twisted to the verge of breaking because you are witnessing a deeply wounded man trying to justify his own existence.  I admit that I’m not perfect, but if you give me a chance, I have my own kind of beauty.

It’s such a strange time for people with intellectual disabilities and their families.  On one hand, it’s a beautiful time.  There is more inclusion, there are more resources than ever before.  The body of medical knowledge is growing rapidly.  PR for Down syndrome is trending through the roof.

Yet, for all that, the numbers show that we just don’t really want those people in our back yard.

We continue to like and share their stories on social media while at the same time continuing to develop better ways to find them in the womb before they have a chance to sneak into our back yards.

This is something that for most of my life was largely irrelevant.  Maybe it is for you as well.  But when you’re holding your precious child in your arms and hear that 90% of people like her who are discovered in the womb will not be born – you’re kind of forced to think about these things.

That number I heard 8 years ago has been under some debate, and recent studies now put it at around 70-75% of pregnancies in the US.  I’m happy to see that smaller number, but it’s still alarmingly big.  And it’s much larger around the world.  In the UK it’s 90%.  In Denmark 98%.  In Iceland the number is approaching 100%.  In China, the most populated nation on the planet, the termination rate is 95% and selective abortion for disabilities is legal up to 9 months in the pregnancy.

I’m happy that my daughter was born into a social moment in which she will be celebrated.  Maybe she will be a model, or a prom queen or a beloved neighbor in the dorms of a college campus.  Shoot, at the rate we’re going, she might even be President someday.  I’m very happy about that.

But  I’m not sure how long this moment will last. It’s those numbers that keep me awake at night.  I’m worried, but not just for my daughter or people like her.  I’m concerned for our civilization.

What is the consequence when the worth of a human life is measured by it’s attractiveness to others, it’s production to society, it’s ability to conform to its’ society’s standards of perfection?

An Example from History

There is a museum in Berlin called the Monument to the Murdered Jews of Europe – it’s an instrument of education, designed to give a history lesson in the inhumanity humans are capable of.  In the museum there is a long, roundabout wall covered in photos, newspaper clippings and historical notes. I will never forget what I saw half-way through my journey at the monument.

Up to that point it was just surreal.  This is so insane, it’s so unbelievable that I can’t process the reality of it all.  It’s not really hitting home.  Until I see the word disabled.  There’s a section on the treatment of people with disabilities and I am no longer numb.

In the early days of Nazi power, health departments worked with police, psychiatrists and other social departments to create a registry of disabled people.  Those on the list were sterilized or institutionalized.  They were “ballast existences” – they diverted provisions needed for the more productive segments of the population.

Things escalated quickly from there and in October of 1939 Hitler issued an order for the murder of those on the registry.  Action T4, it was called.  It was billed as a process of euthanasia, merciful death.  As in, ‘don’t worry friends – we’re just doing them a service, a mercy, by ending their suffering.  It’s for them.’

Behind the scenes though, the real purpose of Action T4 was to rid Germany of “useless eaters” – 200,000 mentally disabled persons.  But they didn’t just kill them, they made them useful.  Many of those non-producing consumers were first experimented on by men like Albert Widmann. He was a chemist who tested killing gasses, drugs and poison ammunitions on the disabled at the “euthanasia” camps, those houses of mercy.

Action T4 quickly grew into the infamous system of concentration and extermination camps which carried out the Nazi final solution, the creation of a more perfect humanity.

What does it do to a society when they decide that a particular class of individuals is a hindrance to the pursuit of the common ideal and therefore eligible for sacrifice?

After the monument in Berlin, I visited a place called Sachsenhausen, an hour drive from the city.  Sachsenhausen was one of the first concentration camps in Nazi Germany.   At the camp, one of the few original buildings still intact is the main guard tower.  Seventy five years ago young men stood in that tower looking out over the fields and buildings in which they oversaw the horrific experimentation, the torture and murder of a class of people who were deemed unworthy of life.

The tower is now a museum which houses a collection of files.  They are biographies of the young men who left their mothers and their homes in the villages of Germany to become soldiers of the SS, servants of the glory of the German ideal.  The files contain the stories of ordinary young men who were shown a vision of perfection, handed the knife-blade of selective “euthanasia” and became monsters of inhumanity in the process.  One decision at a time.  The collection is a clear warning.

When a social ideal takes ultimate priority, when non-ideal individuals are sacrificed on the altar of that ultimate priority, bad things seem to follow.  Decisions like that change people, they change a society on a fundamental level.

It seems strange to compare a society which crowns girls with disabilities as prom queens to the Nazis and their final solution.  But the statistics force us to admit that we might have more in common than we would like to believe.  There’s more than one way to create a society which consumes its individuals.  There’s the obvious ones – the brutally cold, oppressive violence of 1984 and the Nazis.  And there are more subtle varieties, like the pleasantly intoxicated, blissfully distracted and genetically engineered beautiful people of a Brave New World.   Entirely different on the surface, peel back the skin and they are identical.  Both are the result of an effort to reshape humanity according to a social ideal, the image of a perfect world.  Both are a society without a soul.

Do you think my daughter is cute?  Wonderful!  Me too.

But do you think she is worthy of life?  Should you or I or any one else have the power to make that determination?

Doesn’t this seem like a question that deserves some serious thought?

What if there is more to life than relentlessly chasing after perfection?  What if we are all hopelessly imperfect and our social archetypes of the perfect life are empty promises?  What if the ideal form of our humanity is bound up in things like grace and mercy and compassion – and don’t we risk those things when we choose to sacrifice a population who isn’t perfect enough for us – who ask too much of us?

Maybe we are so prone to self-centeredness and greed and pride that we need a strong corrective medicine.  Maybe we are a little bit like those carts in the grocery stores, those crooked-wheeled swervers that need a constant corrective nudge in the right direction to keep moving forward.  And maybe Sjeord, that beautifully imperfect Dutchman, is just the corrective we need.

Sometimes I look at my daughter and it’s as if some form of unspoken, telepathic communication is taking place – soul to soul. I’m imperfect, I’m needy and dependent, and I can save you.   I will teach you what it is to have compassion, to love without condition.  I will show you the irrepressible joy of authentic, unaffected imperfection.  I will bestow upon you the invaluable treasure of grace for the undeserving.  I will show you what it means to be human.  Every time a baby with Down syndrome enters our world, whether they sneak in the back or find an open front door, they bring this message.

Maybe we can only truly be human together with people like my daughter and Sjoerd.  Maybe that profound mystery Desmund Tutu saw in our racial differences is also true for our differences in ability:

“Our humanity is bound up together, for we can only be human together.”

I believe it is.  That’s why I write.  I believe my daughter can save our humanity. 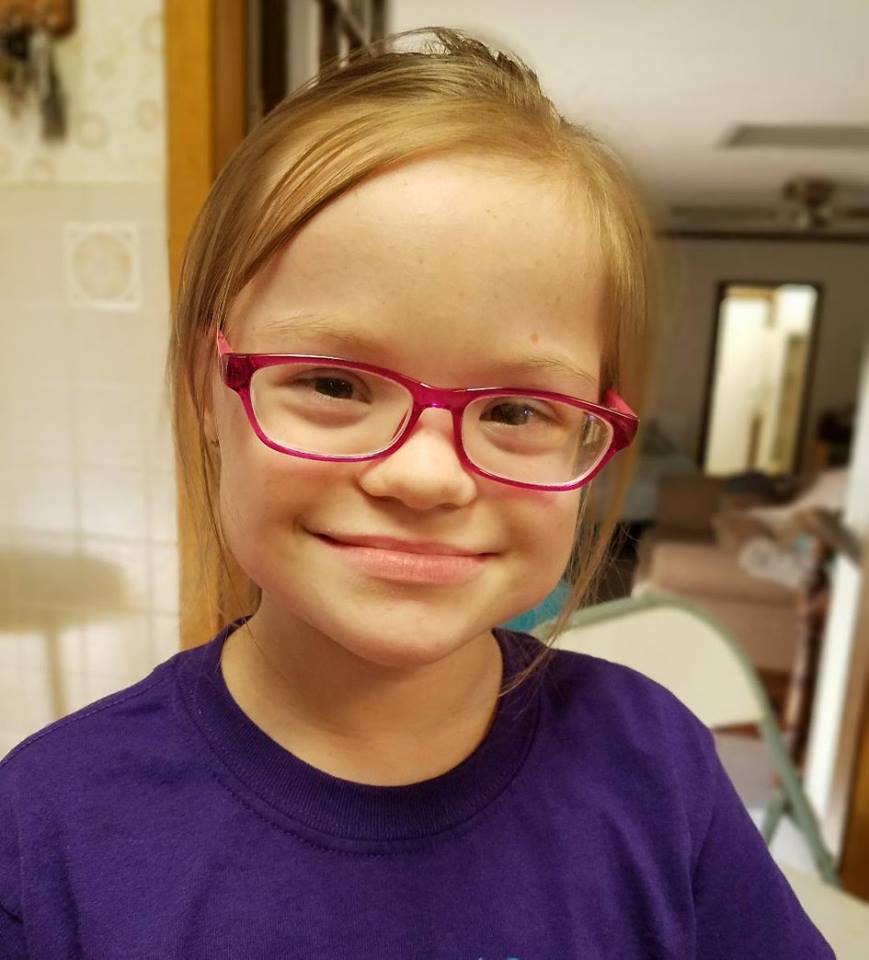